In several instances, problems sleeping aren’t caused by something going on in your body, but instead something going in your environment. A bed partner’s tossing and turning, interfering temperature or lighting, a baby’s crying, or a neighbor’s loud music are very common culprits of environmental sleep disorders (when your sleep is disturbed by conditions related to your external surroundings). Now, according to a Mayo Clinic study, a new source of sleepless nights is being explored: house pets.

The organization’s study, which was presented in 2013 at the Annual Meeting of the Associated Professional Sleep Societies,  targeted 110 consecutive patients at the Mayo Clinic Center for Sleep Medicine. The study revolved around a comprehensive sleep questionnaire distributed between the months of August and December. All questionnaire respondents were asked to record the type and number of pets they owned, as well as information about their animals’ behaviors, sleeping arrangements, and any pet-related sleep disturbances they had experienced. 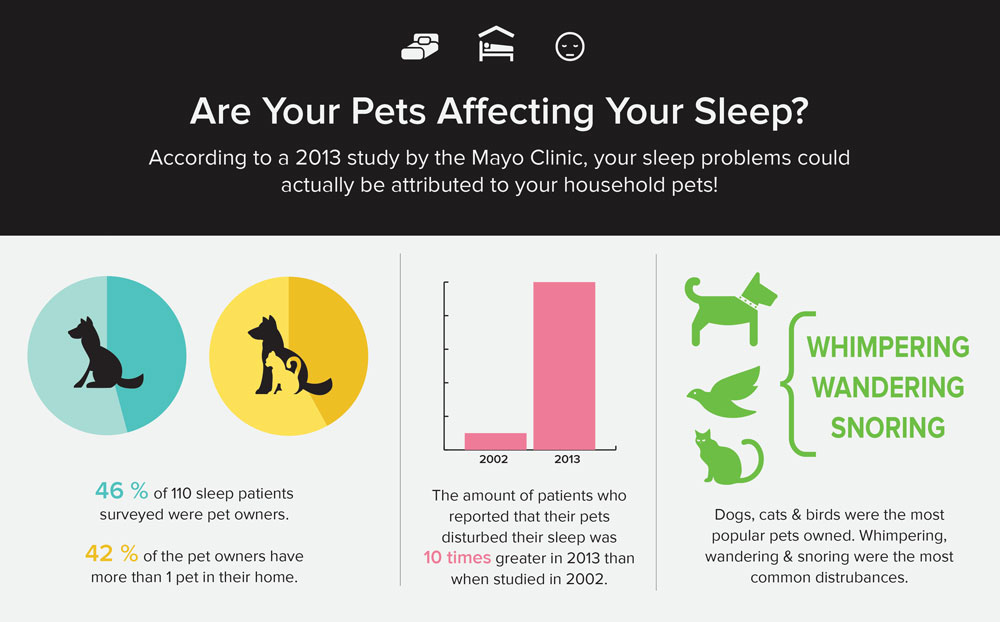 Among the patients surveyed 46 percent reported owning pets, and 42 percent claimed to own more than one animal.

Dogs, cats, and birds were the most popular pets, and the most commonly reported sleep disturbances were whimpering, wandering, snoring, the need to “go outside,” and medical needs.

Mayo Clinic psychiatrist and study author Lois Krahn, M.D. states that the majority of the patients involved in the study did not perceive their pets as “intolerably disturbing.” While most patients felt that their pets were tolerable, a higher percentage of patients than in a similar study conducted in 2002 reported experiencing feelings of irritation regarding their pets. Dr. Krahn attributes this increase in self-reported disturbances in part to the growing number of households in which multiple pets reside.

In 2002, the Mayo Clinic published a study indicating that among the clinic’s patients, only one percent reported sleep disturbances related to their pets.

By contrast, the organization’s 2013 study suggests that a significant portion of patients with pets — ten percent — reported that their animal companions sometimes caused sleep disturbances.

While for pet owners with sleep disorders the study’s findings may appear to have dire implications, the good news is that getting rid of your beloved animal may not be the only solution to achieving restful sleep. From do-it-yourself books to group classes, private trainers to animal psychologists, pet owners have access to a vast array of resources that can help to discourage their pets from engaging in sleep-disturbing nighttime behaviors.

If you feel your pet is causing your sleep disorder and you’re thinking about seeing a sleep specialist, the best thing for you to do is to let your doctor know about your furry companion, so they can help you find solutions to getting a better night’s rest.