Parents concerned about ADHD should not only be attentive to the AMOUNT of sleep their child receives, but also to their QUALITY of sleep.

A medical study highlighted in the New York Times (Attention Problems May Be Sleep Related) revealed that children with sleep breathing disorders were 40 to 100 times more likely to exhibit behavioral problems like ADHD.

“Diagnoses of attention hyperactivity disorder among children have increased dramatically in recent years, rising 22 percent from 2003 to 2007, according to the Centers for Disease Control and Prevention. But many experts believe that this may not be the epidemic it appears to be.

Many children are given a diagnosis of A.D.H.D., researchers say, when in fact they have another problem: a sleep disorder, like sleep apnea. The confusion may account for a significant number of A.D.H.D. cases in children, and the drugs used to treat them may only be exacerbating the problem.”

Treat the Cause, Not the Symptom

I have long contended that children who snore or experience poor sleep become wired, not tired.  Unfortunately, these children are being treated for their symptoms (ADHD) rather than the real cause (a Sleep Breathing Disorder). Even worse? The drugs that are commonly used to treat ADHD, such as Ritalin, Adderall, or Concert, can actually end up causing insomnia. By using drugs to treat the ADHD symptoms, doctors may be doing more harm than good because they are not addressing the root cause of the problem.

Shifting Our Focus to Sleep, Not Just ADHD

Sleep medicine is one of the fastest growing fields in healthcare today and researchers are discovering new health implications from poor quality sleep in nearly every field of medicine. With recent discoveries into sleeps’ implications, healthcare providers of all specialties are beginning to view sleep on the same level as nutrition as a component to good health. In fact, the study’s lead author, Karen Bonuck,  stated “It’s incredible that we don’t screen for sleep problems the way we screen for vision and hearing problems.”

One of the main concerns is that children with sleep apnea and even milder forms of Sleep Breathing Disorders (SBD) are not likely to “outgrow” their condition as they mature. In fact, it will likely only become worse.

How does it worsen? Poor quality sleep due to sleep-breathing disorders has been proven to increase calorie consumption (study) and weight gain. The weight gain creates excess tissues around the neck. This extra weight causes the airway to narrow or collapse, causing or worsening the sleep apnea or SBD 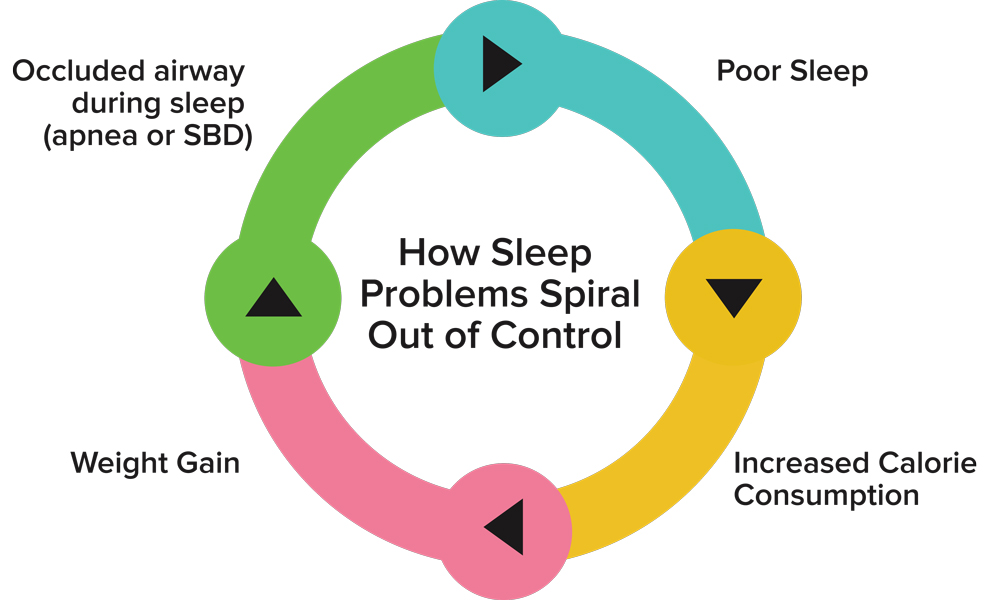 Are you concerned with your child’s sleep and/or behavior? Watch my video below to learn more about what can be causing it and how to address the problem.