Fatigue is one of the most common as well as most debilitating symptoms of Multiple Sclerosis (MS). Experienced by over 80% of MS patients, fatigue and the way it hinders your ability to function at work and at home, is a major contributor to MS patients leaving their job and career.  But obstructive sleep apnea and multiple sclerosis and its fatigue can be linked.

Fatigue amongst MS patients has commonly been attributed to depression, nocturnal muscle spasms, or bladder dysfunction — other common MS symptoms. But, new studies show that Obstructive Sleep Apnea (OSA) is highly prevalent amongst MS patients and may be a major contributor to the fatigue that they are experiencing.

The Prevalence of Sleep Apnea in Multiple Sclerosis Patients

The Multiple Sclerosis Journal published a study in 2011 evaluating the relationship between Obstructive Sleep Apnea (OSA) to fatigue and sleepiness in Multiple Sclerosis (MS) patients. Among the findings in this study, OSA was frequent in MS patients (twice the rate) and OSA was associated with fatigue in the MS population.

These findings have been confirmed by additional studies, including one published in 2014 by the American Academy of Sleep Medicine. In this study, researchers found that one-fifth of MS patients also suffered from OSA and over half had an elevated risk for OSA. Additionally, they found that the risk of OSA was a significant predictor of fatigue severity.

The findings from these studies mirror the results of a study I conducted years ago. MidAmerica Neuroscience Institute presented High Prevalence of Sleep Disorders in Multiple Sclerosis at the Consortium of Multiple Sclerosis Centers (CMSC) meeting in 2004. We conducted a retrospective study to determine the frequency of concurrent sleep disorders in our MS patients. We found:

2. These striking results suggest the need for screening for sleep disorders in MS patients, especially those with fatigue or cognitive difficulties.

3. Preliminary evaluation suggests proper treatment of sleep disorders may improve the clinical status of MS as measured by the Multiple Sclerosis Functional Composite MSFC (a three-part, standardized, quantitative, assessment instrument for use in clinical studies, particularly clinical trials, of MS.)

4. Research regarding the effect of successful treatment of sleep disorders on the pathophysiology of Multiple Sclerosis is warranted. 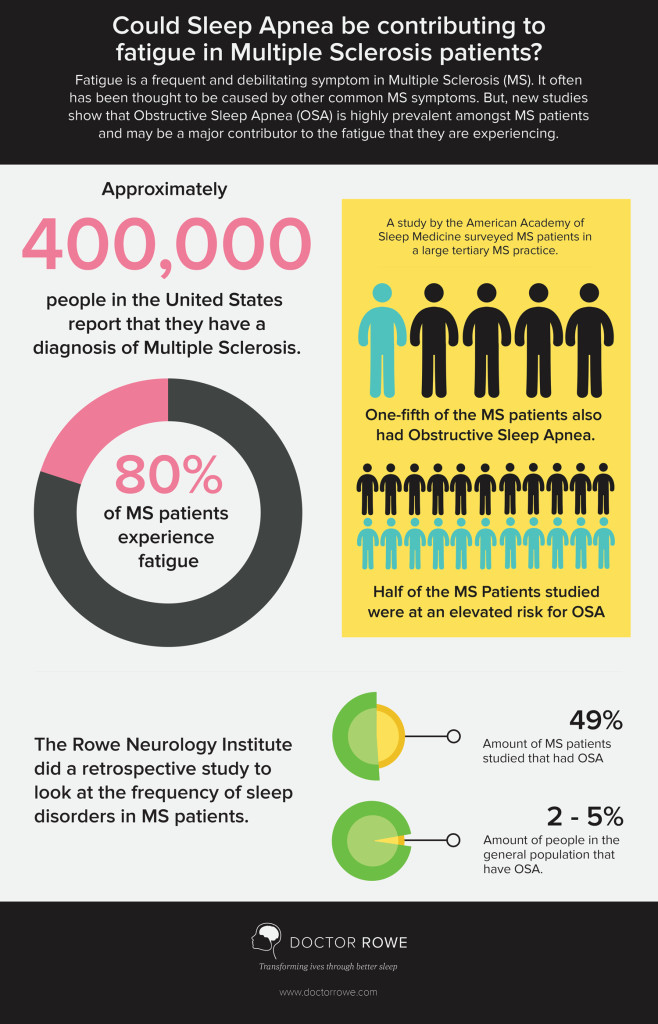 What this means for MS Patients

Because of the multitude of symptoms and conditions that MS patients experience, we can assume that Obstructive Sleep Apnea has often been overlooked by clinicians, attributing the fatigue to other MS symptoms or conditions and/or the medications that they’re on. Consequently, OSA has often been under-recognized as contributing to MS patients’ fatigue. The failure to diagnose OSA is problematic as it’s a chronic illness that can have a very negative effect on your health.  And OSA is a pro-inflammatory condition, like having a chronic infection in your body to turn on your immune system.  If you have MS, you don’t want that!  You’re probably taking disease modifying therapies to tone down your immune system already, so OSA is working against the effects of those medications.

If you have an MS diagnosis, don’t wait for your fatigue to worsen. Bring up the possibility of OSA with your doctor. Ask for a sleep test or a referral to  a doctor who is certified in sleep medicine to conduct a proper sleep evaluation. The sleep test will be able to properly diagnose OSA as well identify its treatment. While more research is needed to determine the cause-and-effect relationships of MS and OSA, these findings increase the possibility that by treating your OSA, you could also be eliminating a large portion of the fatigue that you’re experiencing.

Nervous about the possibility of a sleep evaluation? Find out what a sleep test is and how it will help you get to the root cause of your fatigue. Read About Sleep Studies.