Food and drink that we consume can be the straw that breaks the camel’s back, and become the final trigger for the migraine cascade to start.

However, these triggers usually are additive to other triggers, like sleep disorders and side and stomach sleeping, and neck problems.  Many times what people thought were food triggers may no longer trigger a migraine, once the sleep and neck issues are taken care of.

Some people believe that avoidance of triggers is the wrong thing to do, that we need “to just let our brains get used to the trigger.”  These people think our brains cycle in and out of migraine susceptibility, no matter what we do. But, I believe if we take care of the big triggers, namely sleep issues and neck problems, then avoidance of obvious triggers, such a food and drink, is a good thing.  Because if you do get migraines, as I do, you really want to avoid them! 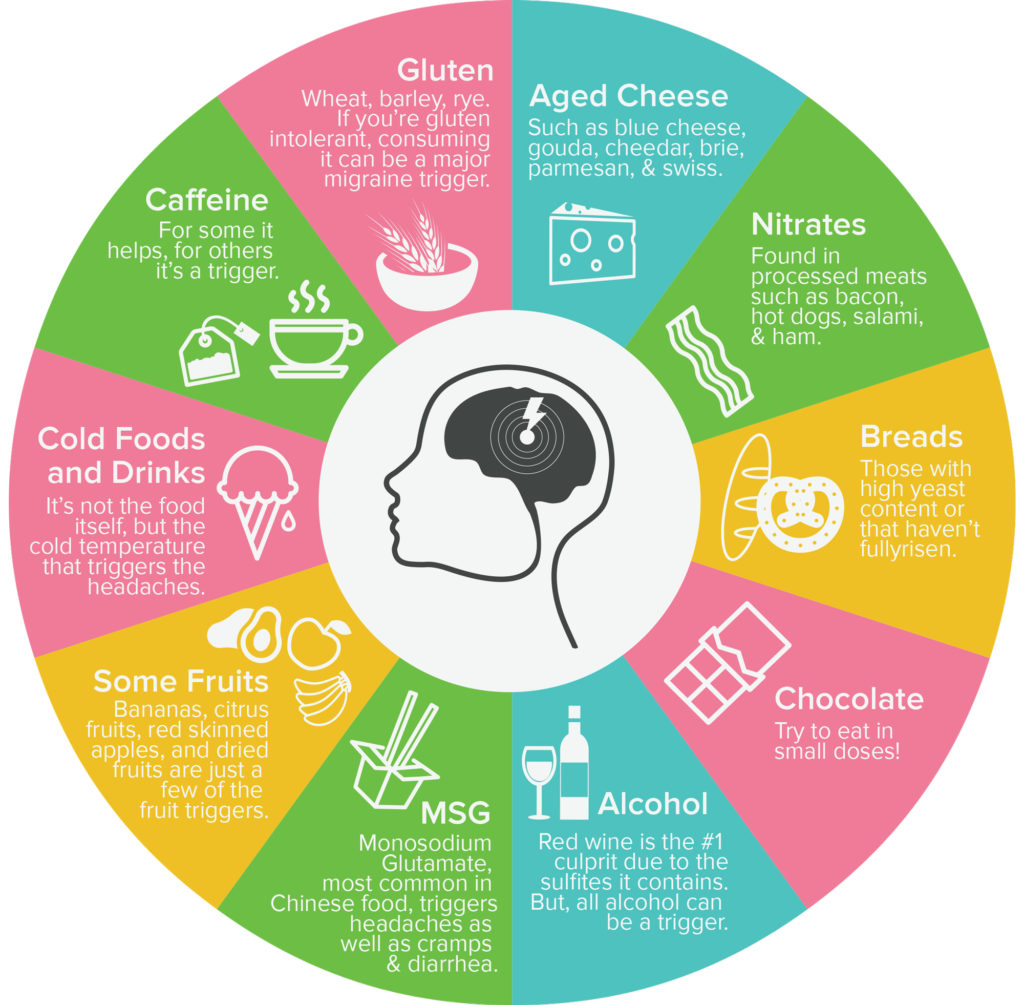 Aged Cheese: Aged cheese contains tyramine, an analogue of catecholamines, or stress hormones, formed as proteins in the cheese break down over time. The general rule is that the older the cheese, the higher the tyramine content.  Examples of cheeses to avoid cheeses include cheddar, parmesan, gouda, blue cheese, gorgonzola, brie, and swiss.

Chocolate: Chocolate can trigger headaches in some people, which is real bummer for those of us who love chocolate!  Some think the responsible agent is tyramine, the same trigger that is in aged cheese.  Others say that you crave chocolate during stress and hormonal changes, both which trigger headaches. When eating chocolate try reducing the amount you eat, eating enough to satisfy the craving, but not so much that it triggers a headache.

Caffeine: Coffee, black tea, green tea, soft drinks. These are problems primarily because they contain caffeine. For some people, drinking too much caffeine can trigger a migraine. Paradoxically, in small doses caffeine can actually help a headache and is even included in some migraine medications. If you’re drink at least 200 mg of caffeine a day (approximately 2-3 cups of coffee), stopping your caffeine consumption will likely result in a caffeine withdrawal headache. Try slowly decreasing the amount of caffeine you drink and then stick with drinking the same amount regularly.

Alcoholic drinks: The biggest problems come from red wines which contain sulfites as preservatives. Plus, any type alcohol increases the blow flow to your brain, resulting in dehydration, which is a known migraine trigger. Beyond migraines,  alcohol is also a well known trigger for a special type of headache, called cluster headaches. Try alternating alcoholic drinks with a glass of water. If you notice a strong link between alcohol and your migraines, it’s probably best to avoid it all together.

Ice Cream and Cold Foods:    Eating ice cream, shaved ice, or any other cold food too quickly can trigger head pain, called an “ice cream headache”. This is in response to the cold, not the ice cream itself. This is thought to be due to temporary reflex contraction of blood vessels in the throat. For most people the pain lasts about 30-60 seconds.  However, for people who suffer from migraines, this pain could last longer and trigger a migraine. The best solution is to slow down when consuming cold foods or drinks.

Breads: Yeast has a naturally occurring chemical called coumarin which can trigger migraines. Try to avoid yeast breads that aren’t is not fully risen, or are less than 24 hours old.

Gluten: The grains wheat, barley, and rye all contain the protein “gluten”. Many people are either sensitive of intolerant to gluten. If you suffer from gluten sensitivity,  consuming gluten will cause inflammation in the central nervous system which leads to migraines. Try to eat naturally gluten-free foods to minimize your gluten consumption.

Fruits: Though fruits can do us a lot of good, there are certain ones that you should pay attention to if you are prone to migraines.   citrus fruits, avocados, raspberries, plums, figs, and dried fruits are best to be avoided if you are prone to migraines.  Certain fruits such as bananas and avocados have high levels of tyramine (the same trigger as aged cheese & chocolate) once they become overripe. Many migraine patients’ migraine onset has been linked to consumption of fruits with tannins, a plant compound that gives these fruits their astringent taste. Tannins are found in red-skinned apples, pears, citrus fruits, blackberries and raspberries, as well as apple juice and cider. Finally, it’s best to avoid dried fruits, prunes, figs, and apricots, which contain sulfites – a migraine trigger.

Nitrites: Nitrites are used as a preservative in many meats, such as hotdogs,  bacon, salami, ham, and others.  These chemicals dilate the arteries to the brain, and also the heart, creating a “migraine ready” state.   Nitroglycerine used to treat angina in heart patients can trigger headaches, even though a person doesn’t have migraines. When eating meat, eat it fresh. Avoid preserved meats and any other food that is not “nitrate-free”.

MSG (Monosodium Glutamate): This chemical is used to enhance flavor foods, particularly Chinese food, and often is a major trigger of migraines.  Too much of this additive can also cause cramps and diarrhea.  MSG is a strong form of sodium and excess salt can trigger migraines.  Though the exact mechanism of this is not clear, because salt, or sodium chloride, is present in every cell in our body, if you’re prone to migraines, it is best avoid consuming too much salt.

Get more help with avoiding triggers and getting migraine relief. Read my 7 Tips to Get Your Migraines Under Control.